The Insidious Growth (of Betrayal) by startabby

Title: The Insidious Growth (of Betrayal)
Author: startabby
Fandom: Marvel Cinematic Universe
Genre: Action/Adventure, Drama, Dystopian
Relationship(s): Tony Stark & James Rhodes (friends), Tony Stark & Loki (mentor)
Content Rating: PG-13
Warnings: Death-Minor Character, Discussion-Torture, Kidnapping, Violence-Canon-Level
Beta/Cheerleader: Rae
Word Count: 62,000
Artist: taibhrigh
Summary: Anthony Edward Stark has survived the crucible of Afghanistan only to find that the Ten Rings was merely the tip of the iceberg. A cabal plot to see him removed from the playing field, brought under control by whatever means possible. But Tony Stark is nothing if not resourceful. Even from the depths of the Oubliette, he discovers that he possesses the will to survive, as well as a surprising new ally in his struggle.

While Tony fights for his freedom, his best friend James Rhodes has his own battles to wage. Taking the place that in another universe belonged to the younger man; he is swept up into the world of aliens and grand battles as the Iron Soldier. Unaware of the truth, he becomes a tool of the same cabal who holds his friend prisoner. But secrets cannot last forever, and a time of reckoning is coming…

Loosely inspired by one of my favorite classic action-adventure novels – I’ll leave it up to the reader to figure out which one, ‘The Insidious Growth (of Betrayal)’ is the first of what will eventually become at least a two-part series. 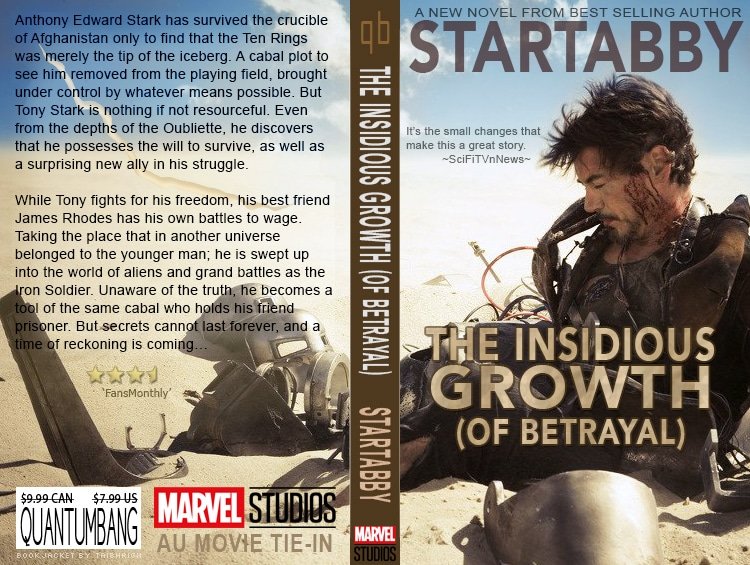 This story grew out of my frustration in watching Captain America: Civil War, especially with how Tony was treated by the rest during that film. As I was in the middle of a re-read of my other inspiration at the time, I asked the question, ‘what if Tony was the main character of the novel that I’m reading?’ and things sort of spiraled out from there. It’s gone through a number of iterations, including a massively expanded first part (aka this story) compared to my original draft, but I think that it was worth it.

Thanks to those who have helped to keep me motivated in getting this story done despite massive RL changes over the year. Thanks especially to my big bro, who was my primary beta despite not being a fan fiction person, and to Rae, who answered the call and gave me positive feedback on my rough draft. Thanks to my artists, Myana Luna and pinch hitter taibhrigh, for your willingness to help bring my story to life. And of course, thank you to Keira, Jilly, and all the rest for organizing this event. It’s been a wild ride.

Prolific lifetime reader in my 30s with a fondness for science fiction and fantasy, I fell down the rabbit hole of fan fiction a few years back. More recently, this has led me to write fiction of my own. Rough Trade and the Quantum Bang have given me a wonderful outlet to explore this hobby and its value as an escape from the challenges that we all face IRL.
View all posts by startabby →