Title: Earthbound Misfit
Author: Claire Watson
Fandom: Teen Wolf
Genre: Pre-Relationship, Time Travel
Relationship(s): Derek Hale/Stiles Stilinski
Content Rating: R
Warnings: Major Character Death, Violence-Canon Level, Discussion-Murder, Discussion-Genocide
Author Notes: A big thank you to Saydria Wolfe, whose encouragement of my crazy ideas got me started on this, and to Jilly James, who helped me iron out my midway uncertainty. Thank you to desertpoet and Jilly James for their very helpful Alpha reads, and to HarleyJQuin for picking up my remaining mistakes. A final huge thank you to Sundryder for their contribution, their art is gorgeous!
Beta: HarleyJQuin
Word Count: 62,600
Summary: When Stiles agreed to be drowned in order to save his dad from the Darach, he didn’t expect to survive. He was okay with that, knowing that Scott would survive and would save his dad for him. He didn’t expect to be met by an older version of himself. Other Stiles made some shocking disclosures about their heritage and then persuaded Stiles to undertake what seemed like an impossible task in order to save everything he loved.
Artist: Sunryder 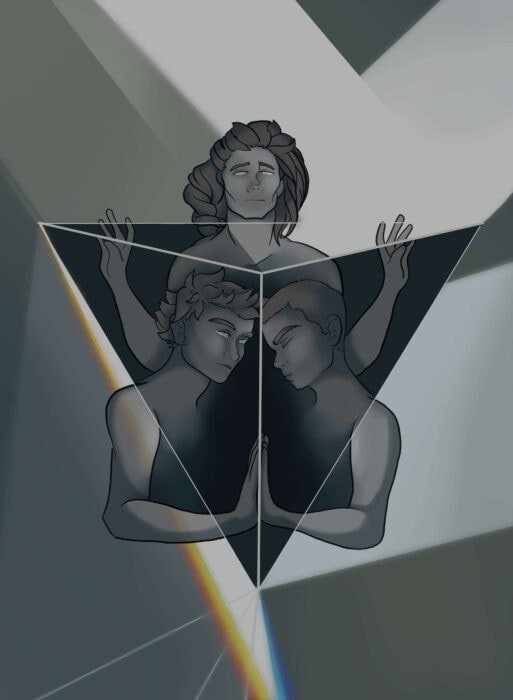 This is a glossary of fae terms by order of appearance.

Rahl-kest – the mystical tree that ties the two realms together, also known as ‘the One’ or ‘the woven core’

Sel’xor ‘na stegtha ni rethsar aykaradi – “We witness the triumph of seasons unending,” The first line of a blessing given by the leader of the High Circle to royal children at their first festival. Royal children are well guarded, and only those closest to the Houses are invited to be present at a royal child’s first festival. Other Stiles was instructed to use the sentence to prove he was from the courts to Harris (Myslon), who had once been honoured by an invitation to a first festival,

By moon and the tree, the sun and the stone; by the sky and river, the blood and the bone. –translation of a fae song sung in the courts.

Banyi – traitors to their House, foresworn.

Sedear’tgac – sacred location in the fae realm. A place of peace, primarily used for the celebration of various feasts (festivals). Its use is one of the matters under dispute between the Houses, for now, no one may use it. Whenever the Houses have reached a point where a treaty is about to be signed, a fight has broken out somewhere that has raised tensions again.

Torl Covenant – an agreement to ensure both Houses leave contested space vacant while it’s being fought over, in order to preserve it for the winning party. Once the covenant is invoked, the area is placed under wards to disallow either House’s sworn members from entry. Since fae swear their oaths before undertaking training, it means that the areas are effectively abandoned. Except the banyel have been using them.

Sa’rahl – “I weave.” A statement of intent, of finishing. Is often used as the trigger words for spells with delays on them. Is often used in speech to give emphasis, or by people who would otherwise say “I did that.”

Raya Darkfire – named for his illusions that were so real that the Karani fae were unable to tell they were burning until it was too late. A great victory for the Aydini.

Merron Lightsword – named for a battle in which a blade he’d enchanted sliced through Aydini fae magical shields as though they were nothing. A great victory for the Karani.

Nosera – the sect looking to raise a third house. They plan to name themselves “highest fae”

Vosteri – Future leader of the Light fae, currently second in line (Arza is the current leader)

Rotah’il – Captured sight. The empty egg sacs of three different types of fae spider are mixed and moulded and transformed into a lens (tah’il), which dries transparent and can be enchanted to act as recorders. Then it was discovered that you can smash the lens and distribute the shards (rotah’il), and they will still record, but will now give a full, 360 degree experience. Breaking the tah’il is a skill in itself, if the shards are too small they become inert and the overall quality of the recording is reduced. A set of rotah’il can only hold one recording at a time (recording something new will overwrite what was already there) but a recording can be removed and stored elsewhere (usually inside a specially mined crystal).

Reading and writing fanfiction is my primary hobby, and I read in a lot of fandoms that I'd be hesitant to write in.
View all posts by Claire Watson →